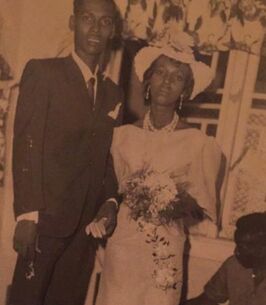 Cyril(Stanley) Maurice Ten-Pow was born on December 13, 1940 in Blankenburg, West Coast Demerara, Guyana. He was the son of Pearl Ten-Pow Hunte and Oscar Hunte. He was the first of nine children born to his parents.
Cyril attended Campbellville Secondary school in Guyana. After graduating, he attended Chatham High school of Georgetown, Guyana where he graduated with honors. He would then go on to graduate with honors from Guyana Technical Institute of Georgetown. With his skills he went on to work for Guyana Electricity Corporation(meter department). He worked there for nineteen years as the Foreman in the Consumer Service Section of Transmission & Distribution Department.
In 1961, at the age of 21 he met his wife Bridget Caldeira Ten-Pow. They shared 6 kids together; Stanley, Diane, Margaret, Robin, Roxanne and Petal. He migrated to the United States on August 19, 1980, residing in Brooklyn, New York. He attended electrical trade school where he obtained various electrical certificates. He continued to pursue his career within the electrical field working for various cooperations as an industrial electrician. Three years later he had accomplished a suitable living for himself which allowed for him to send for his wife and kids. He would go on to reside in New Jersey where he retired in the year 2005.
At a young age he enjoyed reading, sports and classical music. In his time of leisure he watched tennis, cricket, baseball and his favorite football team; the Giants. When he wasn’t watching his sports he took comfort in listening to oldies and spending time with his family. He was a man that valued the importance of education and made sure he instilled those values into his future generations.
It is said that a mans’s blessing is the legacy they leave behind and in that regard, Cyril has been richly blessed. With his eighty-one years, he has lived long enough to see several generations. At his passing, he leaves to mourn 20 grandkids(Samantha, Jaron, Crystal, Jamal, Fulani, Shawn, Adrieanne, Nicole, Marlon, Margo, Jamal.E, Jamal.H, Yasmine, Kyri and others), 14 great grandkids(Justin, London, Halle, Cory, Eliana, Kaiyan, Sire, Zoey and others).
He will be remembered with love by his mother Pearl Ten-Pow Hunte, his siblings Maurice VanVield, Juliet(Rita) Emanuel, Marva Payne, Melvin Hunte, Donna Kendall, Errol Hunte, Clinton Hunte and Ronald Hunte; brother in- laws Frederick Payne, Richard Emanuel and Percy Caldeira; sister in- laws Beryl VanVield, Eileen Hunte, Lynette Hunte, Coleen Hunte, Faith Hunte, Myrna(Jane) Edghill, Cathleen Caldeira, and Mary Grannum. He would also be missed by his Aunt Violet, his Uncle Claude, 13 nephews, 11 nieces, 12 great-nephews, 14 great-niece, and many relatives. He was predeceased by his Uncle Kenneth Rosario and sister in law Lilly Caldeira.