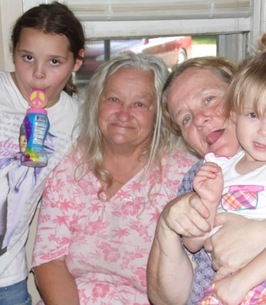 Sindy Chambers of Dudley North Carolina formally of Pemberton Township passed away at her home on July 8, 2022, at the age of 58. She was born in Mount Holly and called Pemberton her home all her life. Sindy was a devoted mother to her children and a cherished grandmother. She was dedicated to her church and her faith. Sindy enjoyed going to the casino's and playing scratch off lottery tickets.
She was preceded in death by her father Orville Chambers, her husband Gary Clouston, her brothers Brian Chambers and Orville Chambers; and her sister Judy Chambers. Sindy is survived by her mother Peggy Chambers; her children Angela Clouston (Isaac), Jessica Clouston (Laquan), Kimberly Clouston (William), Olive Clouston, Dawn Webb, Gary Donohue (Tanya), Brandon Donohue, Steven Chambers, and Ronald Hopkins. She is also survived by her brothers Franklin Chambers, Dennis Chambers, and Steven Chambers. Sindy is also leaves behind 19 cherished grandchildren. She will be missed by many friends as well.
A viewing will be held on Friday July 15 2022 from 10:00am until 12:00pm at the Lee Funeral Home 317 High Street in Mount Holly where a prayer service will be held at noon. Interment will be private. Email condolences to the family at leefuneralservice. com. Arrangements were made with Ed Kaelin III at the Lee Funeral Home, Mt. Holly.