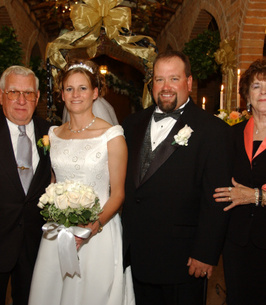 Born in Mt. Holly, Jim was a steadfast and loyal man, true to his heritage as a U.S. Marine. After enlisting during World War II, he went on to serve as a sergeant on five ships, including the Shenandoah, the Philippine Sea, and his longest service on the U.S.S. Manchester. Jim married Lillian Bozarth, settled in Lumberton, and went to work at Hercules Chemical Company for 40 years, moving his way up to plant manager.

Jim stayed by Lil’s side, caring for her during a long illness. After her death, he met and married Selma Caruso, taking on her family of five grown children as his own and stepping in as “Grandpa Jim.” This late-in-life marriage for both of them was filled with dancing, camping, car shows, and visiting friends and family. Jim lovingly showed his pristine 1961 Ford Galaxy, for which he held the original bill of sale. When he and Sally rode into a show, more often than not, they rode out with a trophy, filling a wall of shelves.

Jim had a quick wit and was a talented handyman who would tackle any project, from sturdy cradles to the 28-foot cabin cruiser that he built in his basement. He had to remove a wall to get it outside, a tale that brought laughs for years. Jim practiced taxidermy, painted with oils, gardened, and maintained fishponds.

An active member of the Marine Corps League, he volunteered for 15 years on the annual Toys for Tots drive. He was a member of the U.S. Navy Cruiser Sailors Association and the Boulevard Cruisers Car Club.

In addition to his wife Sally, he is survived by his stepchildren, Frances and Ronald Connelly of Ouaquaga, NY, Anthony and Sidney Caruso of Pawleys Island, SC, Daniel Caruso and Barry Stephen of Provincetown, MA, Donna and Scott Bowden of Deep River, CT, and Steven and Colleen Caruso of Jobstown, NJ. He is also survived by his brother-in-law Ronald Heston of Southhampton, NJ, as well as many nieces, nephews, and grandchildren. He is predeceased by his wife Lillian, a brother, a sister, and two infant children.

Viewing Services will be held on Thursday, July 21, 2022, at 2PM at the LEE FUNERAL HOME, 317 High St., Mt. Holly. Friends may visit with the family Thursday, Friday from 1-2PM at the funeral home. Interment will follow the service in the Junior Mechanics Cemetery, 133 Carranza Rd, Tabernacle, NJ. Email condolences to the family at leefuneralservice.com

Arrangements were made with Ed Kaelin III at the Lee Funeral Home, Mt. Holly.