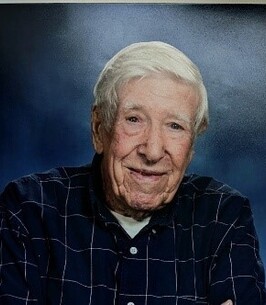 Dewayne Kenneth Guhn of Columbus, NJ died on August 12, 2022, at Samaritan Inpatient Hospice Ward, Virtua Hospital, Mt. Holly, at the age of 96. He was born February 2, 1926, in Sharon Springs, KS, where his parents were farmers. Due to the “dust bowl” impacting the ability to successfully farm in Kansas, his parents soon moved the family to a farm near Imperial NE where he spent his childhood.

After graduating from Chase County High School, he immediately joined the Navy and served from 1944-1946 in the Pacific theater on the USS Presidio (APA-88). He benefited from the “GI Bill” and was able to attend and then graduate from the University of Nebraska in 1951 with an electrical engineering degree. He moved to New Jersey to join RCA in 1951, first in Camden then Moorestown. Here he met his first wife, Jean, and together they raised four children in Mt. Holly. He received his Master’s degree from Villanova University in 1966. As part of his employment with RCA he spent 12 years (1966-1970 and 1982-1989) working on Kwajalein in the Marshall Islands. He retired in 1991 after a long and fascinating career developing technology in plate tectonics and radar systems.

He was an active member of St. Paul’s Lutheran Church from 1955 to the time of his death. He served there in many capacities as Council member, teacher, worship assistant, and active participant in the Men’s Prayer Breakfast group. He served as a director on the Rainbow of Hope organization in Burlington County. Dewayne was an avid walker and hiker and hiked most of the Appalachian Trail north of the Delaware Water Gap over the years. He was a bridge Life Master and actively played duplicate bridge until just a few years ago. Due to declining physical health, Dewayne moved to the Masonic Home for the last year of his life, where he delighted in visits from family and friends and deeply appreciated the care provided by the staff there. Dewayne had a quiet soul, a giving heart and an inquiring spirit that kept him always looking forward to seeing “what was beyond the next mountain top.”